Digital technologies have become very firmly established in our lives and today they are present in almost all spheres of human activity, and cultural and educational is no exception. Over the past few months, news more and more often informs about the opening of the next “library of a new generation”, “library of the future”, library automation. Today, all of these concepts are strongly associated with the introduction of radio frequency identification (RFID) technology, which helps libraries achieve the main goal of attracting as many readers as possible, while maintaining a high level of satisfaction with the institution.

In the Russian State Library, the first project for the implementation of a radio frequency identification system was implemented in 2010 by specialists of the RST-Invent company in the Central Subsidiary Fund. This project has become an example to follow for a huge number of federal, regional and other libraries.

How it all began

The Russian State Library is the largest library in Russia, the second largest in the world. Founded in 1862, it was part of the Moscow Public and Rumyantsev Museums. From the moment of formation, he receives obligatory copies of all publications published in our country. On January 24, 1924, it was renamed the V.I. Lenin Russian Library. On February 6, 1925, it was transformed into the V.I. Lenin State Library of the USSR, since January 22, 1992 it is called the Russian State Library.

Now in the funds of the RSL there are about 50 million books, documents and storage items. More than 800 thousand people visit the library annually, about 100 thousand new library cards are issued annually. The RSL has 36 reading rooms, in which more than one and a half thousand people can work simultaneously.

In 2010, it was decided to digitize the Russian State Library and the management had to make a choice between the implementation of RFID technology based on UHF (ultra-high frequencies) or HF (high frequencies). Based on the expert opinion * of highly qualified specialists from RST-Invent, who evaluated the scale of implementation, the RSL preferred the UHF RFID system.

RST-Invent is a manufacturer of RFID tags and equipment at both frequencies and has experience in equipping libraries with both UHF and HF systems.

Automation of the Central subsidiary Fund of the RSL using RFID technology was divided into stages:

1. Labeling of the book fund with UHF RFID tags

2. Replacement of library cards with RFID cards and modernization of entrance turnstiles

3. Installation of the anti-theft system

Labeling of the book fund with UHF RFID tags

RST-Invent engineers have created a unique RFID-tag BiblioTag, which serves as an identifier of the publication, as well as a means of protection against unauthorized removal. BiblioTag is adapted for labeling the book fund in the conditions of simultaneous use of RFID and barcoding technologies and is perfect for solutions where additional duplication of any graphic information is required during the marking process. An RFID tag can be attached to a book in two ways: on the page itself or on the spine. Using RFID tags to label books allows identification through the cover, eliminating the need to open the book. 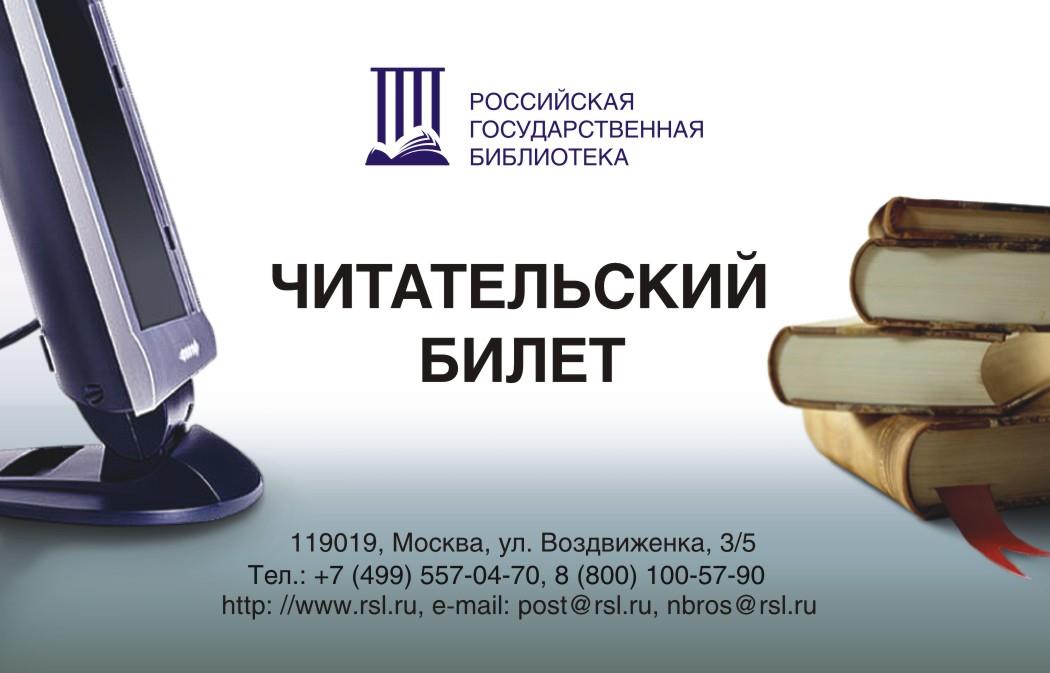 To speed up the process of identifying library readers, the RST-Invent plant produced plastic cards with an integrated RFID tag, which became Electronic Library Cards.

At the time of the implementation of the radio frequency identification system, most of the library tickets were a card with a printed barcode, in this regard, it was necessary to modernize the entrance group of the main central entrance of the RSL so that it was possible to identify readers both by tickets with a barcode and on Electronic library cards with RFID-tag.

RFID tags, like library cards, are manufactured at the RST-Invent plant in Vsevolozhsk.

To implement the project, RST-Invent specialists developed and manufactured equipment for the modernization of turnstiles, equipped with a barcode reader and RFID readers. If necessary, it is possible to uninstall the barcode scanner without damaging the appearance of the turnstile or interfering with its design.

The upgraded turnstile identifies the library card and shows the security guard information about the person passing by. This is how a counterfeit ticket is prevented from entering the institution. 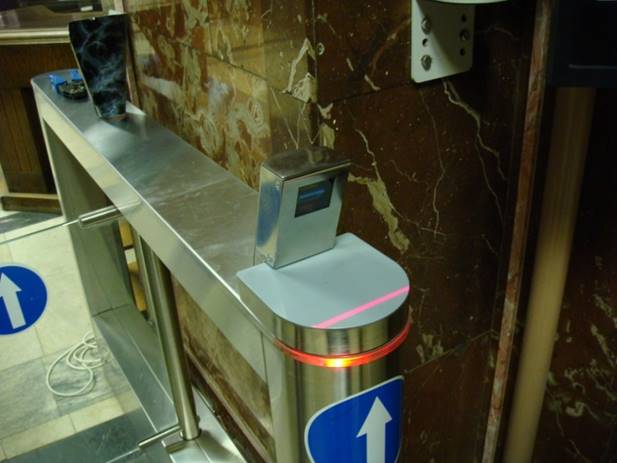 Installation of the anti-theft system 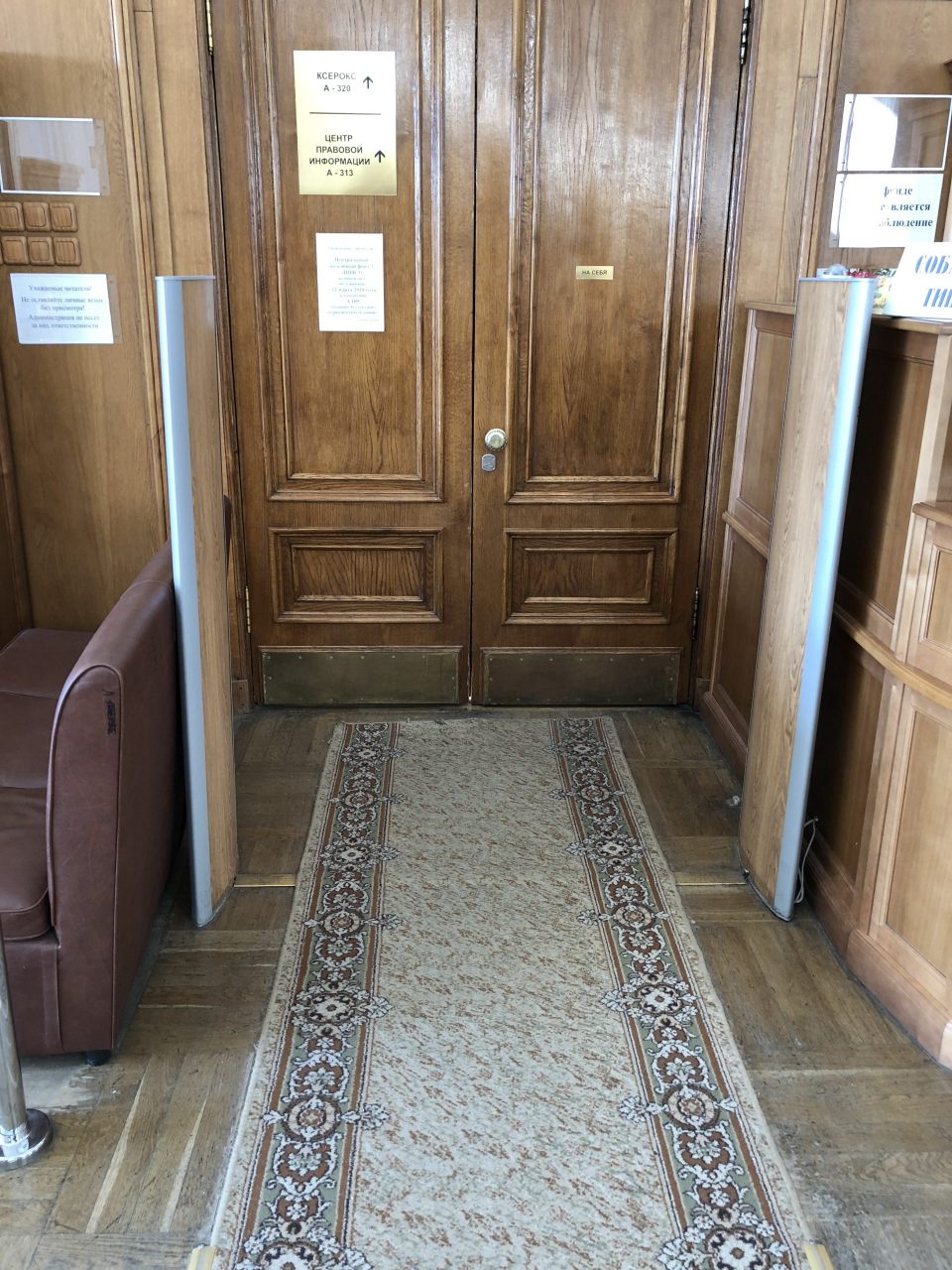 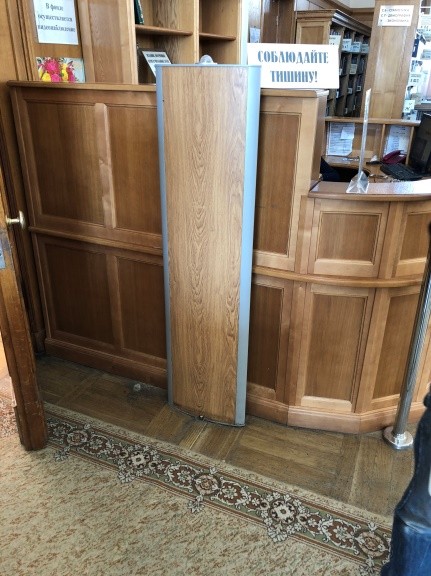 The funds of the RSL contain a large collection of unique and very valuable domestic and foreign documents, therefore it is strictly forbidden to take books outside the reading room in the library.

The entrance / exit to the reading room is equipped with a portal RFID reader, the design of which does not violate the interior design of the library. The reader automatically identifies the library card of a person passing through it, and also records the time of passage with an accuracy of a second.

In the event that an alarm is triggered when trying to take a book out of the room, the RFID anti-theft system helps to speed up the search and viewing of specific frames in the timeline. The security officer no longer needs to watch an hour-long video in search of an incident. He can enter in the video surveillance system the exact time of identification of theft and view the necessary fragment to establish a match between the identity and the data of the library card.

The largest public library in Russia and Europe is a landmark with an interesting history, which hundreds of fans of cultural recreation rush to visit. But in order not to disturb the visitors who came to read the books, the RSL suggests taking an audio guide at the entrance. But immediately a problem arose: the audio guide device is so small and weightless that visitors often simply forgot to return it when leaving the library building.

Therefore, it was decided to create an automated system for recording audio guides based on UHF RFID technology.

An RFID tag was integrated into each audio guide, and antennas were installed at the entrance. This system identifies visitors with audio guides and notifies the library employee about this using an audio signal. 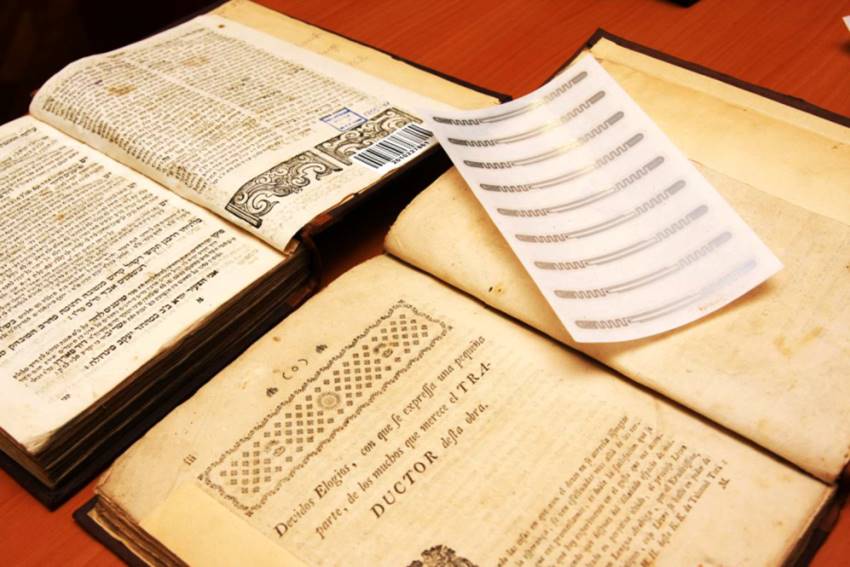 In addition to the main fund, valuable publications and rare manuscripts of the Rumyantsev Hall and Schneerson’s library are also subject to registration.

Each piece has a high value, so ordinary RFID tags cannot be used to mark them. Thus, RST-Invent specialists have created a BiblioTag SE tag adapted for rare editions with an adhesive layer that does not damage the paper when peeling off and does not have an adverse effect over time, which was confirmed in the conclusion by specialists of the Scientific Research Center for the Preservation of Documents (SRCPD).

The Rumyantsev Hall, or the Department of Manuscripts, was created in 1862. Its fund included a unique manuscript collection of the State Chancellor of Russia N. P. Rumyantsev. At present, the department collects, stores, studies and presents for researchers of Russia and the world manuscript books and archival documents of the 6th-20th centuries, the funds number over 650 thousand items.

The Schneerson Library is a unique book collection that belonged to the Lubavitch Hasidic dynasty before the revolution and was nationalized by the Soviet regime in the 1920s. In 2013, these books were brought together again on the territory of the Jewish Museum in a section of the Russian State Library specially created for this.

For 10 years of cooperation the company “RST-Invent”:

The RFID system project has given a powerful impetus to the introduction of innovative RFID technology into the library field. For example, in St. Petersburg, more than 200 libraries united in a single library system (CLS) are equipped with various RFID equipment to speed up the process of serving readers and optimize working hours. In addition, the technology has been introduced in the libraries of the Higher School of Economics and the Moscow University of the Ministry of Internal Affairs of the Russian Federation named after V. Y. Kikot, in the Library of the Faculty of Economics of Moscow State University, etc.